With climate change upon us, my wife Gray Read and I concluded that we needed to "decarbonize" our lives with solar power.  We started working on it and learned a lot.  I got a notion to start a blog that would help others here in sunny South Miami find inspiration do the same thing.  Here it is.

I'm going to start by describing the solar set-up at our own house (this post).  Starting this weekend we'll turn off the power to see if a couple of batteries can keep the house functioning for a week, such as we hope to do following the next hurricane.

I'll probably start a map of local solar installations, and provide information on how people can save money while saving the planet by solarizing their own houses and businesses.

When our daughter was young, my wife and I discovered how much hot water long hair requires. We put a solar-thermal hot water heater on the roof to save money.  To our delight, it also provided hot showers following the hurricanes of 2005.  In 2011, we conceived a plan to improve the energy efficiency of our house in South Miami, with the ultimate goal of going solar.  We replaced the light bulbs, replaced a couple of leaky high-hat fixtures, and sealed leaks in the A/C ducts.  That helped.  Over the next few years, as we continued with house repairs, we replaced three leaky doors, insulated the attic, and replaced the old shingle roof with standing-seam metal (galvalum).  Those upgrades cut the summer electricity consumption in half and the new roof lowered our wind insurance premium as well.

In 2014, we put 30 solar panels on the west-facing roof of our house (photo in blog header), comprising 7.5 kW nominal power.  Cash outlay was $16,500, or $11,650 after the federal renewable energy tax credit.  More about solar economics in future posts.

Florida has a good net-metering law, promoted by Gov. Charlie Crist.  As residential solar producers, we signed a net-metering agreement with the utility. Our solar array over-generates during the day, producing more power than the house can use. The extra power is pushed onto the grid where it goes to power our neighbors’ houses.  When our extra solar power flows onto the grid, the electric meter runs backwards, and we get a credit for that power with the utility.  At night when the sun is down, or on a cloudy day, or when we run the clothes dryer (an energy hog), we draw power back from the grid and use our credit.  At the end of the billing period, if we’ve made less power than we consumed, we pay for the difference.  If we made more power than we used, we run a credit with the utility that we can use in the future.  At the end of the year, we level up with the utility.  For any power surplus remaining on our account at year’s end, the utility pays avoided fuel costs of ~$0.03/kWh, less than a third the retail cost.  It does not pay to over-generate, but net-metering works well to cover our costs and it provides some locally generated solar power to the neighborhood, reducing transmission demand on the grid at peak load times. 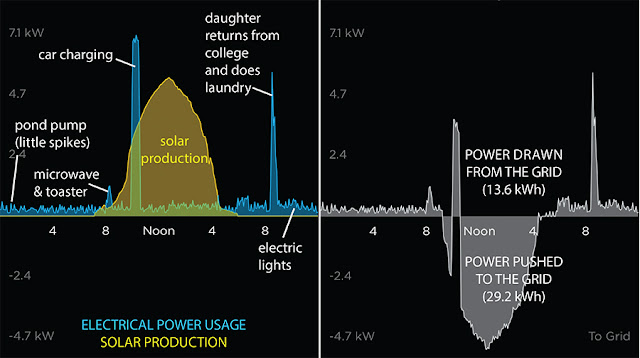 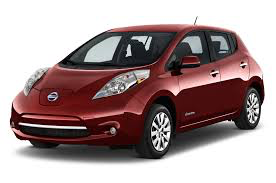 The photovoltaic (PV) array on our roof produced more electricity than we needed, even after net metering.  So, we purchased a used Nissan Leaf EV to soak up that extra power ($11k for a mid-trim model with the faster charger and low miles).  Now we had a solar-powered car,  zippy, clean, quiet, and economical to boot.  How cool is that?

We ended the year with a tiny credit from the utility – effectively we broke even on our electric bill, which is economically ideal.

If your house makes as much power as it consumes, it is said to be “net-zero”.  Our solar array covers the house AND one of our two cars The other car is a 2010 Prius that gets 50 mpg.  Burning gasoline feels so 20th Century.

Following Hurricane Irma in 2017, a lot of folks expressed interest in solar PROVIDED they could use it in lieu of a whole-house generator. 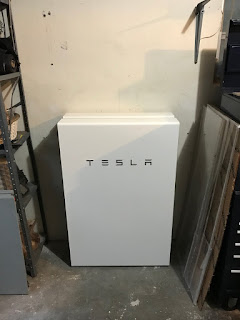 Batteries are needed to provide the power-buffering a solar array needs to stay operational as clouds float by and cause flickers in solar energy.  A few fancy power inverters can provide some power when the sun is up and the grid is down.  We have one of those (SMA SunnyBoy), and it ran our fridge 4 hours a day after Hurricane Irma, enough to keep the beer cold and the Klondike bars frozen.  But to run the house 24 hours a day, including A/C, you need batteries.

Net-metering works great, so there’s no economic benefit to going off-grid, but batteries should make solar power a viable and silent alternative to the noisy, stinky, and unreliable generators.

We purchased batteries for the house to test the concept.  Our batteries (two Tesla Powerwall2 units) reside in the garage and hold 27.5 kWh when fully charged.

Under normal use, these smarties charge to less than full capacity to prolong their lifetime.  But Tesla watches the weather; prior to a storm that might knock out the power, Tesla sends a signal to the Powerwall2 that unlocks the extra charge capacity and charges the batteries to full capacity.  Too clever.

Can our solar array and batteries really run the whole house when the grid power is down?

We intend to find out.  Our plan is to turn off the grid power for a week and do our first trial run, to see what works, what doesn’t work, and what we need to do differently (if anything) to run the house and car exclusively on solar/battery power during an actual hurricane outage.

Our house has a 16 SEER, 3-ton A/C, an Energy Star fridge, a clothes dryer, an electric on-demand water heater to supplement the solar water heater, a submersible pond pump, the usual kitchen appliances (but a propane stove), and an electric car to charge.  I’ll be interested to see if we can sustain all these electron-hungry gizmos with battery-backed solar power.  Maybe the hungriest appliances have to take turns?  Maybe it will be super-cloudy all week.  We will find out.

This test won't be quite as stringent as a hurricane outage for two reasons.  This time of year is not as cloudy as late summer when hurricanes happen.  In fact April is the best month for solar power in Miami.  Second, we don't usually need the air-conditioning this time of year, though we had it on in February for the first time ever, so who knows.  This week is spring vacation so we'll have three college students at home, hanging around the house, opening the refrigerator, poking the microwave buttons, and producing what my daughter calls "unexpected laundry".  On the other hand I expect to drive more this week that I would much following a hurricane, so car-charging will be more of an issue.

We'll probably do another test this summer.

Posted by Philip Stoddard at 10:04 PM